Have you ever gone a week without consuming anything other than water, black coffee, electrolytes and (non-milky) tea?

I sure hadn’t, but I’d heard a lot about the health benefits associated with it. See my subsequent post that goes into depth on some of the research around fasting benefits. 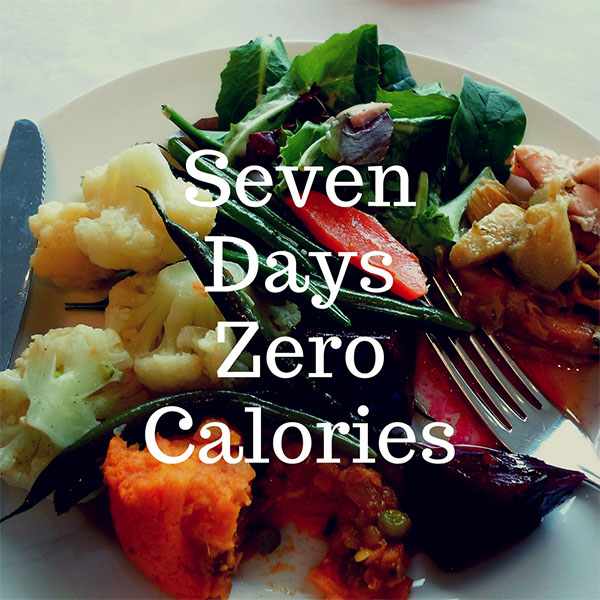 I grew up in a devout Catholic family, so fasting is something I’ve done as long as I remember. Our fasting rule was “no meat, no treat”, but that generally translated to Weetbix for breakfast, toast & Vegemite for lunch and pasta with tomato sauce (from the bottle) and cheese. So it was more sensory deprivation than calorie restriction. Oh and super high in carbs. But that was back in the 90s, when only fats were the enemy.

Over the last few years, I’ve taken to various forms of intermittent fasting. A lot of 24 hour fasts. I rarely have breakfast, even though I’m usually up around 5am.

In the last 6 months or so I’ve started increasing fasts to 48 hours and did a 3 day fast. Virtually all of them went really well, so it was time to tackle “the big one”.

I don’t particularly care about losing weight, except as maybe a bit of an internal scorecard. I’m a healthy weight for my height. Sure having better definition would be great, but it’s really low on the priorities.

I find when I do short-term fasts that I have more focus, better creativity in my business, more energy and it’s good to give my digestive system a break.

My goal is to live for a very long time in great health. Pretty much all the data points to fasting being a great way of achieving that.

As it was the start of the year (3 Jan – 10 Jan 2018) I also took time to regenerate my mind through reading some amazing books. They were Relentless, The New Case For Gold, and So Good They Can’t Ignore You:

Going 48 hours is great for giving your body a break, but to truly kick the healing and regeneration into gear, you need to go longer. Most of what I’d read or seen said 7 days was the minimum for getting that.

It takes a few days of no food for your intestines to heal. Then a day or two more and your immune system regeneration kicks into overdrive. Here is Thomas DeLauer with a great video explaining it:

I discovered the downside to supercharging your immune system, tho. On day 3 I got bitten on the foot by some ants. That resulted in the itchiest I ever remember being. It was so bad I had to regularly put ice packs on to calm it down.

Given how much I’m in the garden, I get ant bites all the time. They don’t usually bother me. This time was very different. These were worse than any spider bites I’ve ever had.

It was so bad, it’d wake me up at night.

Because of it, I couldn’t do the couple of kms walking per day that I’d planned. Much to the disappointment of my son’s Pokemon playing ambitions.

On Day 7 I finally figured I’d try rubbing apple cider vinegar on my whole foot. After half an hour or so the itchiness went away for quite a few hours. Re-application took it away for the rest of the time. Sweet heavenly bliss!

How Was Your Energy? Did You Get Hungry?

It was funny, on day 4 I started remembering a whole lot of food I loved as a kid. Dishes I don’t recall thinking about in at least 10 years.

Days 5 and 6 I still got the odd wave of hunger. On those days, if I stood up too quickly I nearly fainted. So I just took it easy. And read a lot.

I got a bit of work done, but not much. I think because it took so much willpower to keep going that I had zero motivation to work. Played Monopoly a lot with my eldest (5yo). It’s his favourite game at the moment.

Day 7 was fantastic from an energy perspective. I even strongly contemplated continuing the fast. But decided against that because, you know, food.

There were no hunger waves on Day 7. By then I was entirely unfazed about eating. It was a lovely change to the previous week.

How Did It End?

On Day 7 I made a batch of French Onion Soup. Like I said I wasn’t fazed about what I was going to eat. Just wanted something pretty easy on the stomach to wake up the digestive system.

I’ve never made onion soup before, but it turned out excellently. As you can imagine, I tasted even better for not having eaten in a week!

How Much Weight Did You Lose?

I weighed myself in the morning every day. I dropped from around (the scales are analogue) 104kg to around 97kg, so 7kg. Interestingly, I was down another kg the day after eating that soup, later followed by smoked salmon and greek yoghurt.

But like I said, weightloss was not a target at all. I like to stay between 90-100kg.

Would I Do It Again?

Yep, I’ll be doing it again at some point in the future. Probably aiming for 10 days. Mainly to see whether Day 7 was just a fluke. People who’ve gone much longer suggest my Day 7 is how it goes after the initial shock.

I think I’ll also prepare for it a bit better. Eating nachos and KFC the day before starting was probably not the best idea lol. I think I’ll go for carb reduction leading to it and maybe that’ll compress Days 3-6 into one day.